As part of the festival, the VFCD Graphic Design Contest 2021: Key Visual & Creative Merchandise was initiated as a theme-based contest that challenges young participants to define and express a strong presence for VFCD 2021 under the theme 'Creative Future: How the cultural and creative industries enhance the social and economic development of Vietnam and promote the smart development of Vietnam’s major cities'.

Nguyen Ngoc Thu, a 21-year-old student from Hanoi, won the best idea with her design concept “Balancing the intersections”, inspired by timeless everyday imageries of Vietnam.

Nguyen Ngoc Thu, a 21-year-old student from Hanoi, won the best idea with her design concept “Balancing the intersections”, which was made with lines and cubes.

Thu’s design was inspired by timeless everyday imageries of Vietnam such as flower vendors in Hanoi’s Old Quarters or ferry boats resting on the banks of the Mekong Delta. Yet the imageries are converted seamlessly into modern and industrial-style designs.

Her design will be developed further and become the key visuals to be applied throughout the festival. She will be featured and mentioned as the Creative Partner of VFCD 2021 and will take home a prize worth 25 million VND. 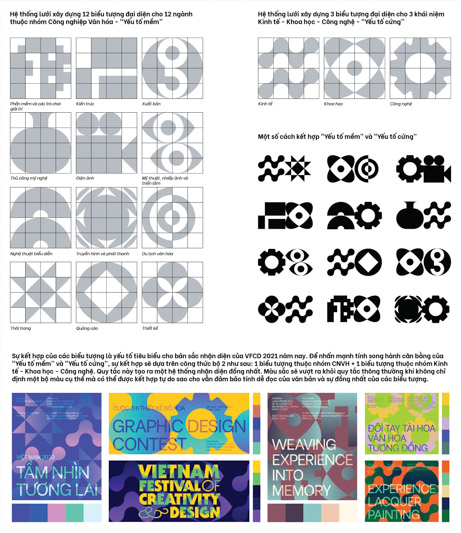 Nguyen Hoang Manh Khang, 26, from Ho Chi Minh City won the inspiring award with his design concept “the harmony of the symbolic elements”.

All four winning entries take into account the use of technology and flexibility across digital channels, which is very important for interactive billboards and digital collaterals as a majority of the festival is likely to be held entirely online.

RMIT Dean of the School of Communication & Design Professor Julia Gaimster highlighted Vietnam’s distinctive heritage and culture have been conveyed through the contest entries, especially through the four winning entries.

“I am impressed with how the designs have tried to strike a balance between modern and traditional elements of Vietnamese cultures and lifestyles. The contestants – all of them young people -- clearly wanted to appeal to both local and international audiences,” Professor Gaimster said.

“They also showed us very clear, professional, forward thinking and well-researched presentations, as well as are talented in the use of technology, with many innovative ideas that would appeal to a variety of audiences.”

The design contest attracted 37 individuals and groups of Vietnamese contestants aged 18-30 from all over Vietnam and abroad.

The contest was beneficial to not only the contestants but also to hundreds of young designers and audiences who directly participated in the two workshops organised by VFCD 2021: Designing Key Visuals & Creative Merchandise: The Dos and Don'ts led by reputable design company Hands Collective; and From VFMD to VFCD and beyond: What we've learnt led by Behalf Studio - the designers behind the impressive key visuals of the previous two editions of VFCD.

VFCD 2021 to explore the creative future of Vietnam

The Vietnam Festival of Creativity & Design (VFCD), held from 6 to 21 November this year, aims to create an open, timely and interactive platform for creative individuals and organisations to engage with thousands of people online.

TEDx RMIT inspires young people to create their own legacy

Held entirely online for the first time, this year’s TEDx RMIT talks attracted its biggest line-up of speakers and audience under the theme “The One Legacy"

A team of two RMIT Vietnam students took home the third prize at the ASEAN Youth Social Journalism Contest with a social media campaign to raise awareness about plastic consumption among Vietnamese youth during the COVID-19 pandemic.