Phan Nhat Tram (aka. Phan-Le Nhat Tram), the lead author and a PhD candidate at RMIT University, said that in healthcare settings, mindfulness emerges as both a treatment and intervention, not only for patients but for healthcare workers also.

“Mindfulness is considered a tool to prevent and treat disease, increase the ability to cope with pain and chronic illness, and reduce stress,” she said.

“For healthcare workers, mindfulness is featured in healthcare training to reduce stress, foster compassion, and reduce medical errors, and outside of healthcare, mindfulness is practised in schools, prisons, corporations, sports teams, and through mobile apps.”

Mindfulness has become a billion-dollar capitalised industry. As of May 2020, more than 20,000 books featured mindfulness on Amazon, promoting the benefits of mindful sleeping, mindful teaching, mindful painting, mindful leadership, and a mindful nation, to name a few. The most popular mindfulness app Headspace has 31 million users worldwide.

However, Tram said that there is an argument regarding the ‘manipulation’ of mindfulness, especially in healthcare practice settings.

“Some Buddhist commentators are critical of mainstream mindfulness that is marketed as equivalent to Buddhist practice, while being ungrounded in the traditional reflective morality of Buddhist ethics,” she said.

“These critics use the term ‘McMindfulness’ to question the use of mindfulness as a marketing image of an idealised lifestyle.”

Although currently there is no scientifically operationalised definition of mindfulness that has been acceptable, the team shows an impactful definition in healthcare contexts with over 4,000 citations in Google Scholar [as of July 2022] which is provided by the Mindfulness-based stress reduction (MBSR) program.

In MBSR, mindfulness is defined as “the non-judgemental acceptance and investigation of present experience, including body sensations, internal mental states, thoughts, emotions, impulses and memories, in order to reduce suffering or distress and to increase well-being”.

“In this school of thought, mindfulness is conceptualised as an act or a behaviour that leads to affective and cognitive outcomes,” Tram explained.

Although this definition is useful in Kabat-Zinn’s MBSR programs, it is not applicable in contexts where mindfulness is considered as a lifestyle or a trait, especially in daily life. This scenario applies for other mindfulness definitions and thus, there are on-going debates about what is and what is not ‘mindfulness’ in difference contexts and research domains. These divergent and conflated meanings are limiting deeper interdisciplinary research. Interventions designed in one practice context may not be useful in other contexts because meaning is not transferred between settings. The team aims to identify research domains of mindfulness and the definition of mindfulness in each domain.

Their study comprises two stages, including a scoping review of mindfulness classifications (stage 1) and a comparative content mapping of mindfulness studies from 2015 to 2021 using a data-mining software (stage 2).

The findings from stage 1 show that there are three shared domains in mindfulness classifications including:

The short-term effects of mindfulness look at its effects on a certain state of mind. Practices in this domain are mostly in clinical settings and intentional with the descriptions sharing the following elements: purpose or intent, present moment, and non-judgement.

The long-term effects of mindfulness examine its effects on traits and behaviours including self-awareness, conceptualising and metacognitive. The long-term effects incorporate the outcomes of mindfulness practices, such as the ability to focus on present experience, open mindedness, and awareness of self. This domain includes elements such as awareness and attention, as well as intentionality and purpose, but is premised on the idea that these skills can be taught, leading to enhanced experiences. 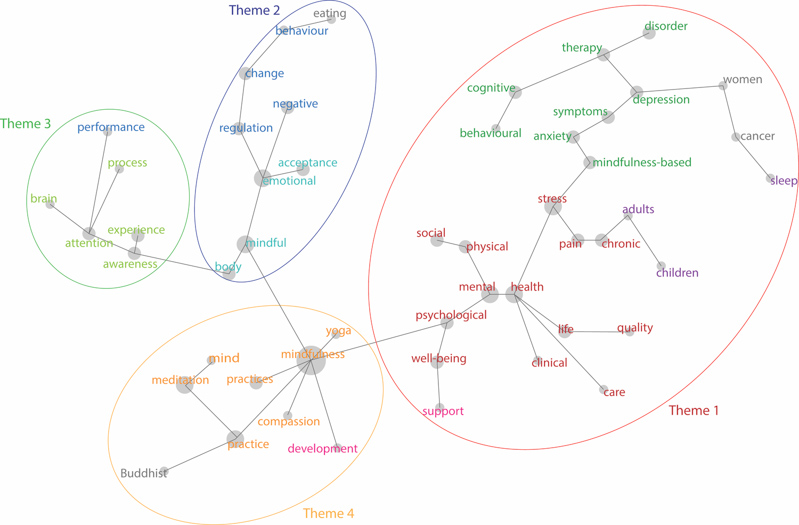 The most dominant theme of mindfulness research – the mental health and well-being domain mainly addresses the use of mindfulness as a treatment for mental disorders and is researched as a means to resolve medical and medically problematised conditions.

The main focus of the second theme is the influence of mindfulness on fostering changing behaviour for prosocial/environmental concerns, behavioural therapy, and emotional control in long-term.

Research in the cognitive neuroscience theme concerns the regulation of mindfulness at these cognitive levels and mindfulness’ effects on the brain. It is the most medicalised of the themes, with both physicians and psychologists examining the impacts of mindfulness on an array of processes such as healthy aging, brain structures, and high-risk mental states.

Research in the last theme – the ethical mindfulness includes the fundamental values and practices of mindfulness.

Compared to the previous three domains, Tram said these four new domains present a practical approach that reduces the extant overlap and duplication between domains, providing opportunities for theoretical clarity in research methods and approaches.

“The clarity offers opportunities to cross-fertilise ideas between domains in future research, allowing for increased understanding of mindfulness theories and practices from multiple perspectives,” she said.

“For instance, the ethical mindfulness cluster is distinct from the cognitive neuroscience cluster. Therefore, mindfulness definitions in these two clusters can be different because they exist in different theoretical contexts.

“On the other hand, the neuroscience cluster and behaviour change cluster share a strong connection, which suggests shared elements in the definitions of these two clusters could be further developed for interdisciplinary projects or intervention programs.”

The team believed understanding the different contexts will facilitate more effectual research design across the range of disciplinary situations.

Her first research as the lead author in collaboration with RMIT researchers Professor Linda Brennan and Associate Professor Lukas Parker - ‘The search for scientific meaning in mindfulness research: Insights from a scoping review’ - was published in the prestigious open access journal in science and medicine PLOS One.

The research is in memory of Zen Master Thich Nhat Hanh, the 'father of mindfulness', and his influence on Western practices of mindfulness.