A Vietnamese team was recently awarded the first runner-up for the first time at the Virtual Global Final of the P&G CEO Challenge 2021.

During the three hours of four intensive simulation rounds, the team “JAGUAR” was challenged to lead a global company through technological and market evolution on the Cesim business simulation system - an experiential learning tool where participants learn by running a virtual business in a realistic environment. 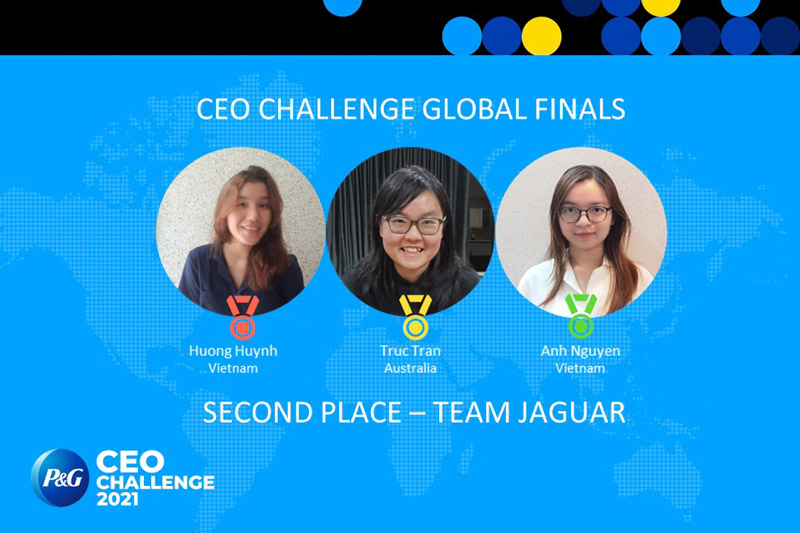 “The simulation demanded us to be quick and precise in our logical thinking, to make a fast connection and correctly measure the impact of our actions,” Huong said.

“There were three main major areas what we could make decisions on including sales gaining, production management, and financial optimisation,” Huong added.

“Therefore, each member of our team led an area and then came up with the final decision on how to effectively allocate our resources.”

There were many changes and developments at the beginning of each round, which required the team to think ahead and plan for upcoming rounds.

“We found that not only we had to plan for the current round, if we wanted to win then we would have to start thinking forward and plan for the upcoming rounds too,” Huong said.

“Together with that long-term strategy, we focused on increasing production capacity while testing sales strategies since there were changes in market each round and plans to expand in the business.”

“Our team learned the harsh lesson of “bigger risk, bigger return” since we were playing it safe and did not recognise the change of market prioritisation to generate the highest profit, leading to a failure in the final round,” Anh said. “We also realised our subjectivity in not carefully analysing competitive strategies when leading the market in Round 3.”

The Global Final of the P&G CEO Challenge 2021 included nine representative winning teams of regions including North America, Latin America, Europe, Asia-Pacific, China and India, Middle East and Africa. The competition aimed at offering youth access to knowledge, skills and resources which can help them in their future

Around 5,000 participants from Dak Nong and Binh Phuoc provinces joined a training series co-organised by RMIT University and the People’s Committee in each province, with financial support from the Australian government through the Australian Alumni Grants Fund (AAGF) managed by Aus4Skills.

From Great Resignation to Great Reimagination - Building the future of work

Speakers at the annual RMIT-Deloitte HR Forum charted the ways forward for organisations when it comes to managing work, workplace and workforce.

The fourth annual Vietnam Festival of Creativity & Design will officially return in November 2022 with the theme CHANGE: Creativity challenge.