Equitable learning for all students

Equitable learning for all students

RMIT University’s commitment to provide accessible and inclusive education to students continues to grow in Vietnam.

The University established the Equitable Learning Service (ELS) in 2013, with the aim of providing equal access, opportunity and support for all students.

“Our Equitable Learning Service supports students with disabilities, learning differences, medical and/or mental health conditions as well as those who care for others experiencing these conditions,” she said.

At the recent inaugural conference Access and Inclusion Practices in Higher Education hosted by RMIT University, the very first RMIT student with a significant visual impairment Nguyen Tuan Tu shared how well RMIT leveraged its ELS to truly transform students’ lives, including himself.

Before starting his presentation, the Bachelor of Business (Business Information Systems) graduate asked the audience to take a moment and think about what disability meant to them.

“A common perception is that disability is something visible such as visual impairment, deaf, mute or any kind of physical disability,” Tu said. “A lot of disabilities are not visible and are not even known to people [who have them].”

Tu quoted a definition from the Convention on the Rights of Persons with Disabilities (CRPD) which states that “persons with disabilities include those who have long-term physical, mental, intellectual or sensory impairments which in interaction with various barriers may hinder their full and effective participation in society on an equal basis with others.”

During his time at RMIT University, starting as an English student in 2011 and going on to graduate with a Bachelor’s Degree in 2017, Tu volunteered to participate in various support and learning strategy trials with varying degrees of success.

“The biggest challenge I had was to get fully involved in class activities and understand the teaching materials,” Tu said. “However, being aware of the circumstances, I had set out to design my own learning strategies and helped many lecturers and staff members learn how to support students like me properly.”

The initial work Tu did with the Learning Skills Unit helped to lay the groundwork for establishing the Disability Resource Centre, which is now known as the ELS. Since its inception, the service has worked with more than 500 students, many of whom have graduated with remarkable results.

Tu shared that one of the ELS’s key drivers has been student engagement and involvement in implementing its main activities.

Nguyen Tuan Tu was involved in a campaign designed by students to formally launch RMIT’s ELS in 2014.

“The ELS was formally launched with a campaign designed by students who were studying Professional Communications,” Tu said. “The campaign aimed to raise the awareness of students with disabilities and the broader community as well as to reduce stigma, and gained great success.”

In early 2014, the ELS introduced the Equitable Learning Plan which outlined the impact that a student’s condition had on his/her learning experiences, and made recommendations for Reasonable Adjustments and Equitable Assessment Arrangements.

“The document does not state the students' condition or diagnosis,” Tu emphasised. “The information is treated with respect and is private and confidential.”

The Equitable Learning Plan is shared by ELS advisors with academic staff who are teaching that student each semester.

The following year, the annual Opportunity Scholarship was established for disadvantaged students who would not otherwise be able to access Higher Education at RMIT. The scholarship covers 100 per cent English and Higher Education tuition fees as well as compulsory non-academic fees, accommodation, a monthly living stipend, a laptop and home travel allowance.

“Ten students have so far been offered this scholarship, and four of them [have] already graduated with excellent results,” Tu shared. 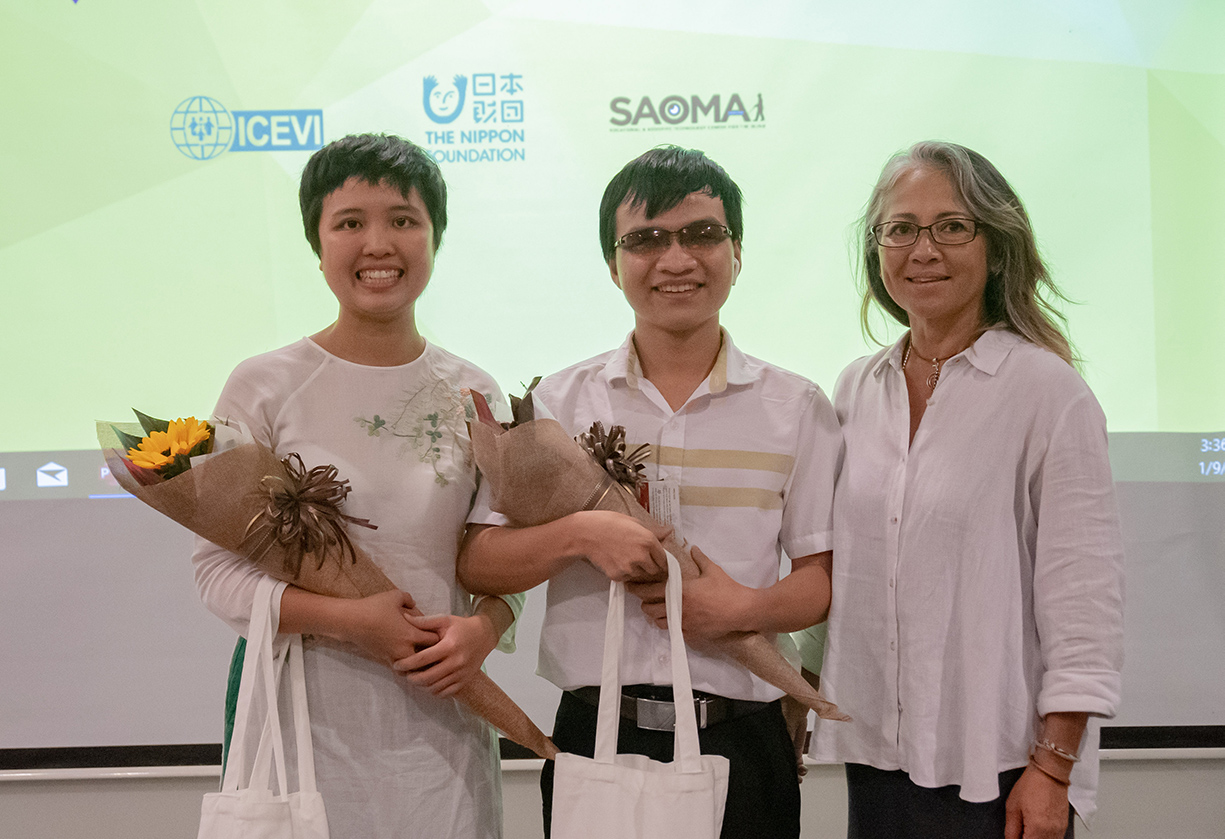 He urged all conference participants to encourage any student they know who matches the criteria to apply, as “this scholarship is for all those who have disadvantaged circumstances and cannot access higher education, not just students with disabilities”.

In April 2016, a university wide initiative led by Learning and Teaching and Equitable Learning Services was launched in response to the inclusion and diversity goals set out in the University’s strategic plan and the Diversity and Inclusion Framework.

From this initiative, all learning materials were converted using an accessible template; all graph and table photos were removed and re-drawn, and alternative text was added to all images. “I was personally involved in this project as I gave feedback on the template, making sure that the colour scheme was easy to read and other things that involve a screen reader,” said Tu.

“Since the launch, the RMIT Access Initiative has already made a deep impact both in accessibility and quality of the learning experience, and has enhanced RMIT’s reputation as a leader in the field of inclusive education in the region,” Tu said.

The newest service Student Aid Programme was established in 2018 to support students in their academic pursuits by giving students the option of booking a reader, scribe, notetaker and/or participation assistant.

“The support allows students to get used to the environment so that they can develop their confidence and independence later,” Tu said. “And we can proudly tell you that many students have become much more confident and independent compared to when they first started, including the person speaking to you.”

“[Equitable learning] enables our students to learn that their disability does not define them, that they can still achieve and contribute with the right tools, and that mindset can create a powerful shift in the outlook and future of a person.”

A graphic design contest for young Vietnamese people led by the Vietnam Festival of Creativity & Design 2021 has been launched for the first time running from 14 June to 3 August. The submission deadline is 11.59pm on 18 July 2021.

RMIT has ranked 206th in the latest QS World University Rankings, consolidating its reputation as a global leader in education and research.

Living student life to the fullest

Three fresh graduates from RMIT recall their personal growth by being immersed in the University’s vibrant community of student clubs.

“How will you know what you are meant to do in life?” For RMIT alumnus Nguyen Huyen Chau, the attempt to answer that question has taken her through an ever-changing journey of self-discovery.