Vietnamese-Australian celebrity chef and restaurateur Luke Nguyen received an RMIT University Honorary Doctorate for his distinguished contributions to the wider community at the University’s graduation ceremony this week in Vietnam. 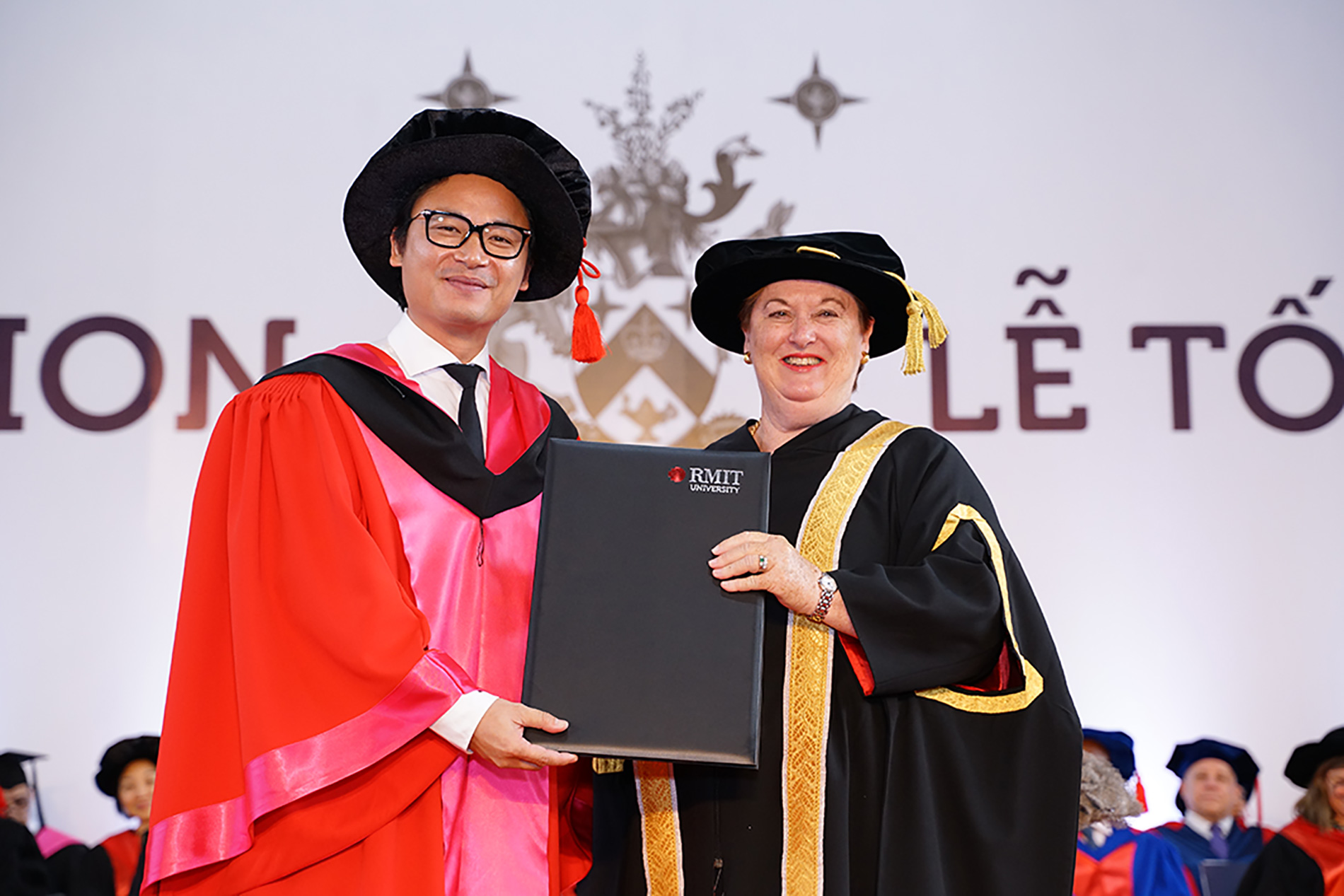 Vietnamese–Australian celebrity chef and restaurateur Luke Nguyen (left) was awarded an RMIT Honorary Doctorate for his distinguished culinary contributions to the wider community.

Luke's love for cooking and his passion for spreading Vietnamese cuisine and culture around the world have earned him an international reputation as a respected and celebrated chef and restaurateur.

While accepting the honour, Luke said food had always played a major role in his life for as long as he could remember.

“My great passion is food, its history, its people and the culture,” Luke said. “It’s all of these things that make food so special to me.”

At the tender age of 23, Luke opened his first restaurant in Sydney and in the decade that followed, continued to open award-winning establishments around the world including Australian restaurants Fat Noodle, an Asian Noodle Bar at The Star in Sydney and The Treasury in Brisbane.

Ten years ago, his dream grew beyond restaurants – he knew he wanted to share his passion for Vietnamese cuisine and culture with the world.

“I wanted to create an authentic cooking and travel TV series through this wonderful country [Vietnam],” Luke shared while accepting the honour. “I wanted to showcase the delicious street food of Vietnam – the food that inspires me every day.”

In 2011, he was inducted into Australia’s Sydney Morning Herald’s Food Hall of Fame for his cooking and culinary travel programs.

Luke is also the author of numerous bestselling and award-winning cookbooks. His first book Secrets of the Red Lantern: Stories and Vietnamese Recipes from the Heart was published in 2007 and has been followed by The Songs of Sapa: Stories and Recipes from Vietnam, Indochine: Baguettes and Banh Mi - Finding France in Vietnam, Luke Nguyen’s Greater Mekong: A Culinary Journey from China to Vietnam, The Food of Vietnam; Luke Nguyen’s France, From China to Vietnam, and most recently Street Food Asia which was published in 2016.

An ambassador for award-winning travel group Australian Pacific Touring (APT) and the host of culinary trips to Vietnam, Cambodia, China, Myanmar and Japan, Luke is also the Global Cuisine Ambassador for Vietnam Airlines and Taste of Australia 2019 – a partnership between the Australian Government, and Australian and Vietnamese producers, distributors, retailers, restaurants, and organisations that celebrate Australian cuisine, culture and lifestyle throughout Vietnam. 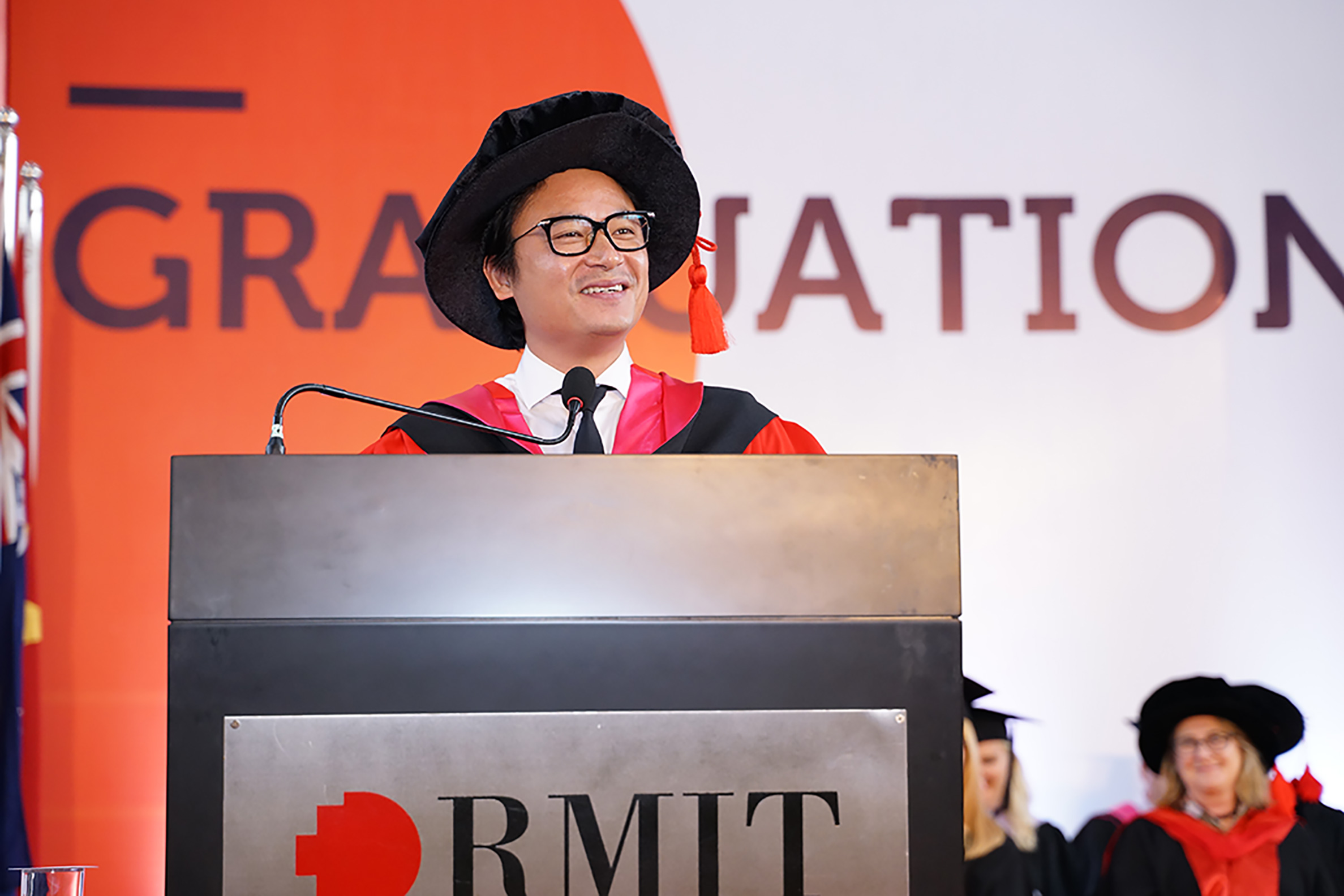 Luke Nguyen asked RMIT’s new graduates to always believe in themselves, don’t be left thinking ‘what if’, be passionate about whatever they do, and never stop learning.

During his speech, Luke emphasised to all new RMIT University graduates that he could not have achieved all this from his humble beginnings without hard work, persistence, drive and great passion.

“Always believe in yourself, don’t leave yourself wondering ‘what if’, be passionate about whatever you do, and never stop learning,” Luke said.

“At 12 years old, I already knew I wanted to open my own restaurant. By the age of 23, I was tired of talking about it, so I searched and found an old terrace house in Surry Hills, Sydney and began to build my dream restaurant. People thought I was crazy; they said I was too young, too inexperienced, and that a Vietnamese restaurant does not belong in the inner city.”

The restaurant is still going strong today and is the most awarded Vietnamese restaurant in the world, but Luke said that may not have been the reality if he had not believed in himself and pursued his dream.

Using his persistence in producing his own TV series as an example, Luke reminded all graduates to try their best so that they wouldn’t look back in life and think “what if”.

“The TV series would still just be an idea in my head if I didn’t believe in myself and grab the opportunity to produce it on my own,” he said. He went on to share the back story, that his idea was turned down by major television networks but has now made it to all major networks globally.

His final piece of advice to graduates was to make sure they were passionate about what they chose to do after university.

“If you’re passionate, the whole world will feel and share your passion,” he said. 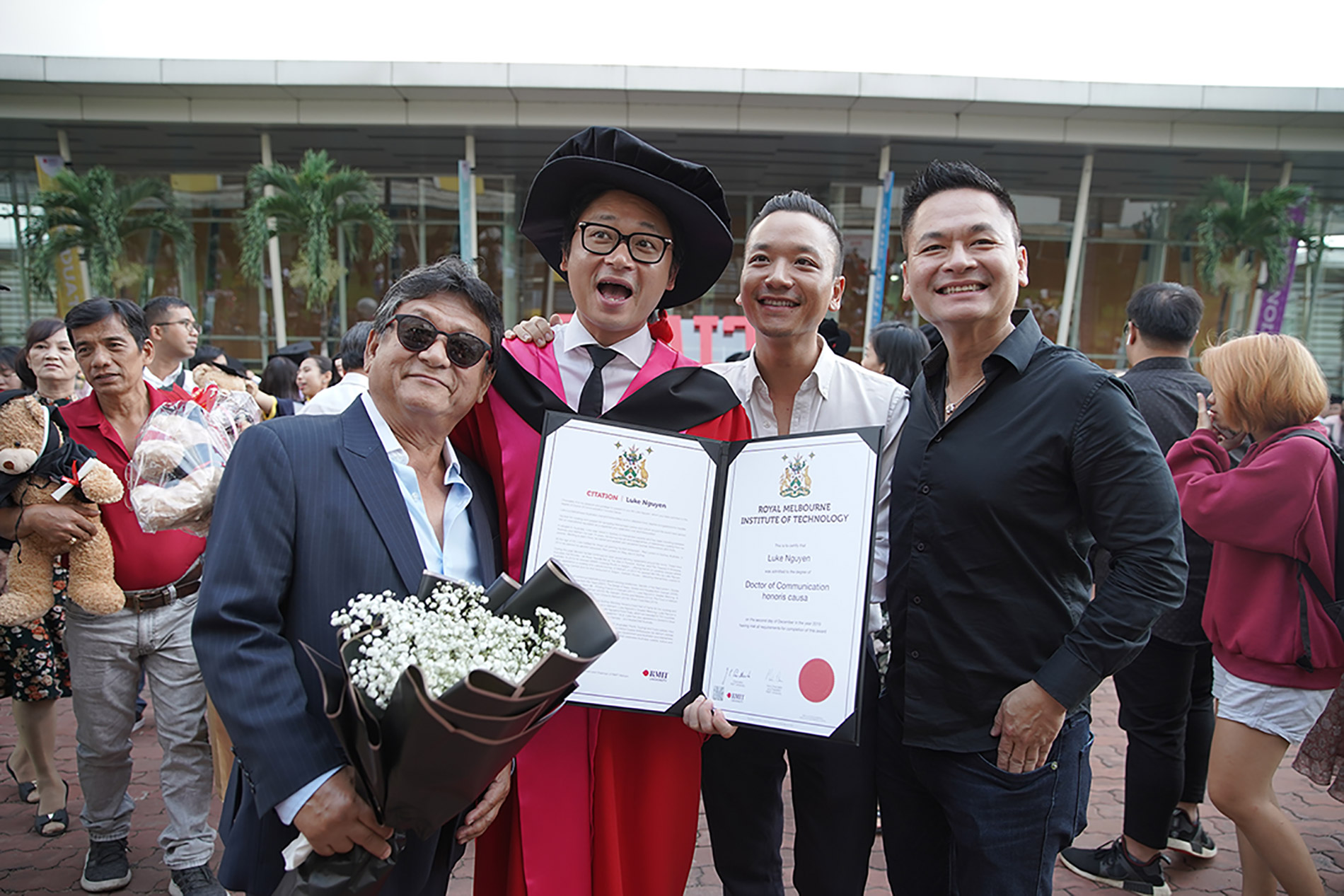 RMIT University’s newly awarded Honorary Doctorate (in gown) and his family at the RMIT Graduation Ceremony at its Saigon South campus on 2 December.