Throughout his academic and career journey, RMIT Vietnam alumnus Le Duc Vu has sought to explore as many creative fields as possible.

As a Bachelor of Design (Multimedia Systems) student, Mr Vu explored film as an avenue of creative expression. 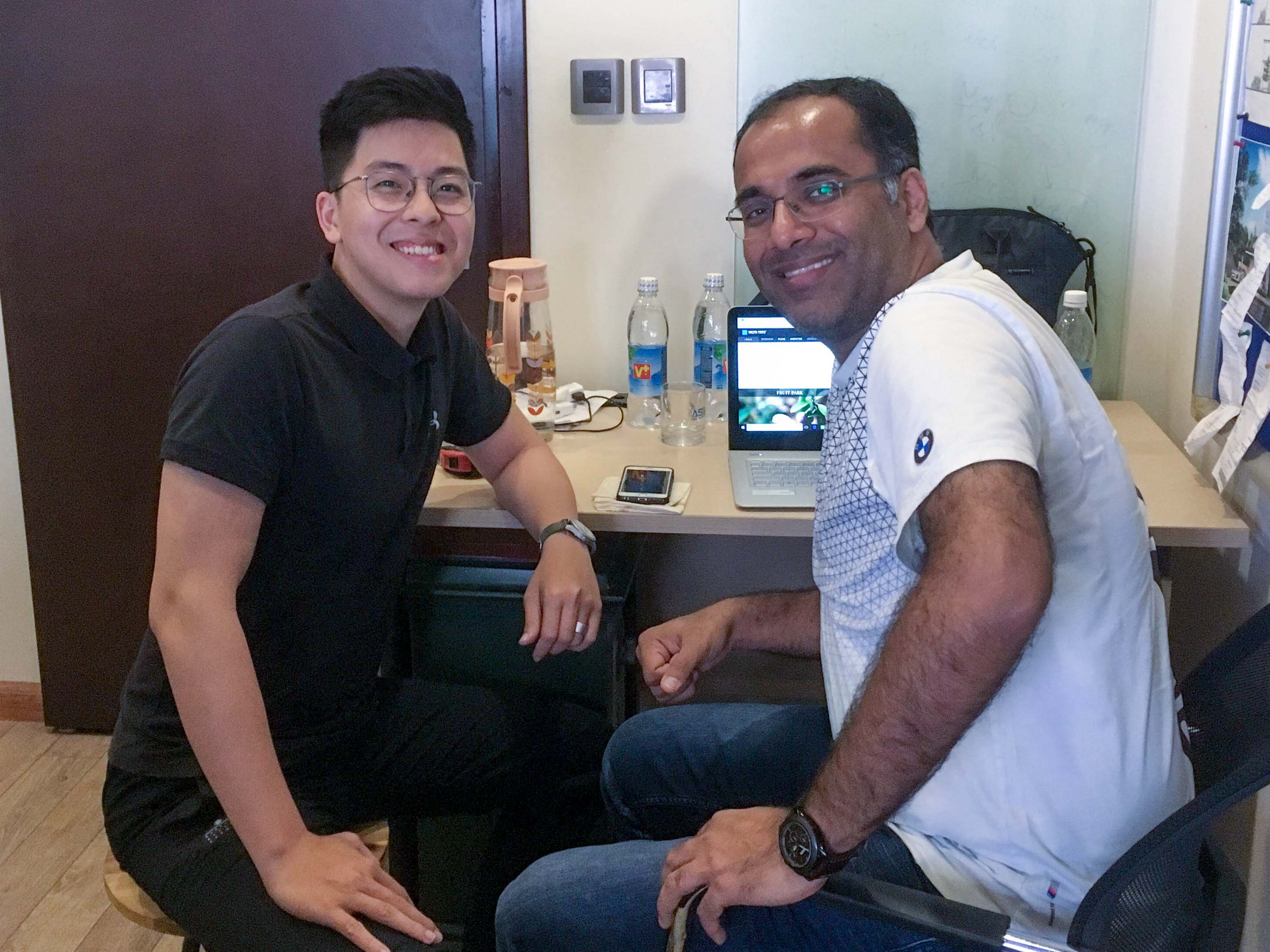 Le Duc Vu (left) and a client from India

I am Genie, a film by Mr Vu and his team Dreamers, won third place in the Best Film category, as well as Best Actress, during the Ho Chi Minh City round of the 48 Hour Film Project in 2014.

“The film is about an apprentice genie of the lamp needing to grant three wishes without using magic in order to become an official genie,” said Mr Vu, the Dreamers’ screenwriter.

“In this competition, we needed to complete the concept, casting, production and post-production processes within a strictly limited time, meaning we had no time to make changes.”

The young filmmaker and his team demonstrated tremendous creativity and dynamism in their storytelling, and were happy with the final result.

At a creative showcase for RMIT design students, Mr Vu left his mark on the program with a short film and an animation. The latter, called Masterpiece, is now featured on OUTPUT, a virtual gallery showcasing the best work of RMIT Vietnam’s design students.

After graduating in 2014, Mr Vu continued to investigate other creative fields as he progressed along his career path. He even had the opportunity to spend two months working with the art department of the 2017 blockbuster movie Kong: Skull Island, which was largely filmed in Vietnam.

“It was all about experiencing different things before I started my own business,” he recalled.

“At first, Bazic Production provided many services, from photography, filming and animation to applications, 2D and 3D. It was very difficult as we had not determined our core services yet and spread out too much,” he said.

After establishing a relationship with a new partner in early 2017, Mr Vu refocused his business to concentrate on 3D production, a skill he mastered during his time at RMIT.

“With the skills and knowledge acquired from my design degrees, I was able to work while studying and learn from hands-on experiences. This provided a solid foundation which has helped me grow quickly in my career and explore as many areas as I wish to,” he shared.

“We are now expanding our services to virtual reality applications, and are able to reach out to customers all over the world thanks to the confidence in the English language I attained during my time at RMIT.”

Discover the future of sustainable materials in fashion

After going viral with his high school textbooks redesigning project while in 12th grade, Tran Lam Nam Bao has won the 2022 RMIT Vietnam Creativity Scholarship. We talked to this talented young designer about his journey to RMIT.

The fourth annual Vietnam Festival of Creativity & Design (VFCD) is taking place in Hanoi from 7 to 13 November before coming to Ho Chi Minh City from 18 to 24 November this year.