RMIT Vietnam Bachelor of Design graduate Phan Hoang An has been awarded for directing the short film Mam non duoi day chai during the 7 Film Fest.

After passing three rounds of the competition, An was handed the script for Mam non duoi day chai, which immediately captured his interest. The story focuses on the passive effects of alcohol on children, who are often left without responsible adults to protect them.

“When I listened to the original script from a script writer, I saw a beautiful and meaningful image of an 11-year-old boy and his little sprout friend,” An said.

“That image represents hope, life and our next generation. So I decided to make a short film which can show how the young generation is affected by alcohol-related products [when adults are not responsible].” 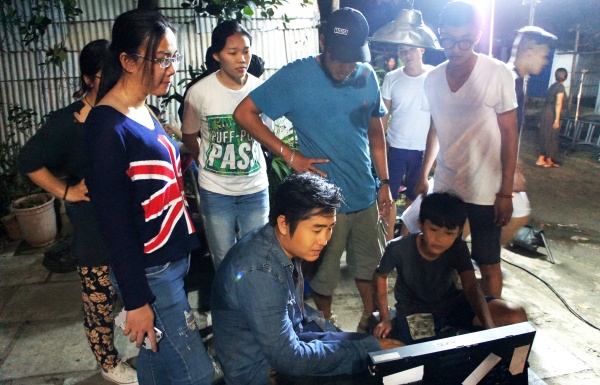 RMIT Vietnam graduate Phan Hoang An (centre) works with his film crew, many of whom are also RMIT alumni.

An’s film was chosen over strong competition at the 7 Film Fest – a regional competition which gives young talent the opportunity to prove their worth. An believes his film ruled the pack due to its atmosphere and its connection with the audience.

“The mood and tone of the film I hope to show is the contrast between the innocent world of a young boy and chaos of irresponsible adults,” An said.

“It was a simple story which can connect with many people because everyone always has a young son or daughter, a young nephew or a younger brother or sister.”

The award paves the way for An to continue working towards his goals, while the competition developed his skills and gave him the opportunity to work with top Vietnamese filmmakers.

“For me, the award is just a step that I made toward the dream of becoming a feature film director,” An said.

“I think I have to learn a lot from others in the film industry and it is a life time journey. However, the award is a great milestone for my career and our team.”

“It was a great experience working with successful and inspiring professionals such as Charlie Nguyen, Ham Tran, Kathy Uyen and Le Thanh Son.”

An looks back fondly on his time at RMIT Vietnam, and was delighted to be able to work with other RMIT Vietnam alumni during the 7 Film Fest.

“I graduated at RMIT with a Bachelor of Design (Multimedia Systems) which gave me many skills of a filmmaker, from pre-production to post-production such as script writing, producing, cinematography, editing and sound design,” he said.

“It helps a lot when I have to co-operate with many departments in the crew. Some of my crew are also RMIT Alumni, so it was great to work with them.’

The future is bright for An, as he targets creating more influential media in professional crews, which will propel him towards becoming a successful filmmaker.

“My current plan is to continue learning from ‘Big Brothers’ in the film industry by joining their film crews; writing some scripts, making films and making several mistakes,” An said.

“And maybe someone will believe in my passion and ability, and I will make my first feature film.”

One of the leading researchers in sustainable fashion at RMIT University, Associate Professor Rajkishore Nayak is passionate about finding solutions for the triple bottom line of sustainability – people, planet and profit.

Is Vietnam ready to become a prominent player amid semiconductor chip race?

For the last two years, the shortage of semiconductor chip has been further exacerbated due to supply chain issues and the ongoing geopolitical conflict. The semiconductor industry has transformed into a source of tension between the US, China and Taiwan.