An entrepreneurial concept initiated at RMIT University was recently announced as one of four winners in the United Nations Development Program’s (UNDP) plastic pollution challenge. 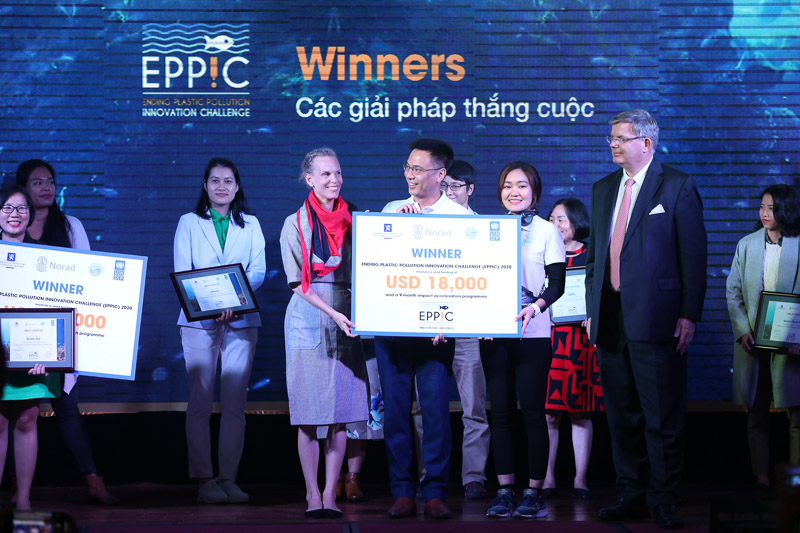 As a winner of UNDP’s challenge in ending plastic pollution, founder of Refill Đây And RMIT Associate Lecturer Nguyen Huu Nhan (pictured with the winner sign) received an $US18,000 grant to implement the initiative in Ha Long Bay Vietnam.

As one of the four winning entries, Refill Đây will receive an $US18,000 grant to deliver the initiative in Ha Long Bay, through a 9-month impact-acceleration program by UNDP Impact Aim.

Refill Đây founder Mr Nhan said the award “will provide opportunities to connect with impact investors and other key development organisations in the ASEAN region”.

“It was through the RMIT’s startup business incubator, Activator that I was able to develop the idea which ultimately helped me succeed in the EPPIC competition,” said Mr Nhan who also won the People’s Choice Award for Vietnam at RMIT Activator’s international competition in May 2020.

He described the core purpose of Refill Đây as one to encourage people to refill and reuse plastic bottles.

“Many of the plastic bottles and containers that consumers buy and use once can be reused many times, and we hope to get people to do that.

“Our goal is to make the idea of refilling accessible to many people.”

Mr Nhan emphasised that although there were some great refill, or zero waste shops in Vietnam, they usually sold expensive products or unknown brands that the average person could not afford or wouldn’t be familiar with.

“We want to change that and help minimise the amount of virgin plastic from entering the environment,” he said.

Refill Đây first launched in Ha Long Bay last year, where the service was well received by local residents. It will be rolled out in Ho Chi Minh City after the Lunar New Year holiday.

A collaborative effort by the UNDP, Ministry of Natural Resources and Environment (MONRE), Vietnam Administration of Sea and Islands (VASI), Norwegian Agency for Development Cooperation (Norad), and Norwegian Ministry of Foreign Affairs, EPPIC is an ASEAN-wide competition aimed at beating plastic pollution in coastal cities in Asia.

Through the competition, UNDP hopes to source innovative ideas from ASEAN countries to help combat the massive plastic pollution problem plaguing the planet.

RMIT has ranked 206th in the latest QS World University Rankings, consolidating its reputation as a global leader in education and research.

Nem Chua – a traditional Vietnamese pork snack – could hold the key to developing a safe and natural food preservative, addressing the twin global problems of food waste and food-borne illnesses.

Living student life to the fullest

Three fresh graduates from RMIT recall their personal growth by being immersed in the University’s vibrant community of student clubs.

Potentials of positive psychology in the classroom

Positive emotions fostered by the positive psychology can improve student’s performance in the classroom, said an expert in learning success from RMIT Vietnam.