World-class security experts from Australia and Vietnam discussed some key fundamental security approaches to combat the complex landscape of the ever-changing cybersecurity threats at a recent webinar hosted by RMIT Vietnam.

“Even though the ‘human factor’ has been recognised as the weakest link in creating safe and secure digital environments, human intuition may also be the solution to thwart and prevent many cyber threats.”

Participants had an opportunity to listen to valuable sharing from an experienced, proven cyber security and academic leader Professor Matthew Warren, Director of RMIT Centre for ​Cyber Security Research and Innovation (CCSRI).​

During his keynote speech, Professor Warren presented the link between human resources and the complexity of maintaining security​.

Professor Warren said that over the financial year of 2020-21, the Australian Cybersecurity Centre identified 67,500 cybercrime reports and the self-reported losses from cybercrime during this time worth more than AU$33 billion [VND 540,773 billion] in total.

“There has been a traditional focus on the role of technology to protect organisations against cyber security threats,” he said.

“Human Security Firewall concept, however, is the collective organisational human knowledge, capabilities and skills, training, and resilience to deal with those threats.​

“This Human Security Firewall has to be trained, updated and renewed to ensure the best protection for organisations.​” 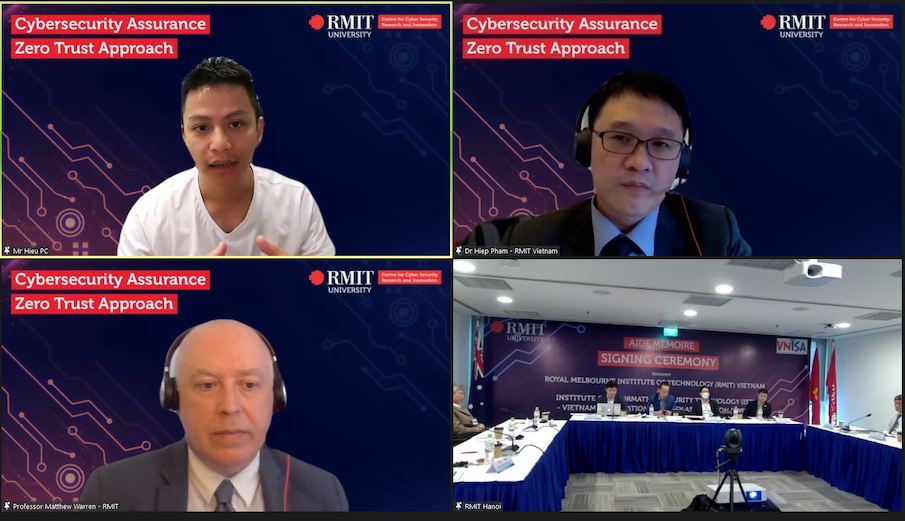 Facilitated by Vietnam Hub Lead of RMIT CCSRI Dr Pham Cong Hiep, audiences were exposed to different perspectives on the zero-trust security approach including the implications of zero-trust security approach to users and IT professionals, a question of whether Vietnam should invest in becoming a world competitive provider of information security services, key challenges to increase national information security capability (human awareness, policy and management, and technical skill), the effect of information security competency levels on a country’s digital economy, and available resources to assist general population in becoming more aware of their personal cyber safety.

As part of the event, RMIT Vietnam and the Institute of Information Security - Vietnam Information Security Association also signed a MOU which aims at developing strong collaboration and commitment between RMIT and Vietnam information security agencies to promote and build better security awareness, policies, and technologies for both private and public institutions.

As the world seeks to rapidly reduce carbon emissions and mitigate the impacts of climate change, could blockchain hold the answer to a more sustainable future?

While plastic materials are essential for society, pollution poses a serious challenge around the world, and Vietnam is no exception. RMIT academic Dr Burkhard Schrage presents innovative solutions to this problem based on insights shared at a recent forum hosted by RMIT.

World-class security experts from Australia and Vietnam discussed some key fundamental security approaches to combat the complex landscape of the ever-changing cybersecurity threats at a recent webinar hosted by RMIT Vietnam.