The growth of e-wallets might be good news for Vietnam’s plans to graduate from the cash economy, but fierce competition among e-wallet providers may result in a ‘survival of the fittest’ situation, according to top finance experts from RMIT University.

The e-wallet market has been one of the biggest driving forces behind Vietnam’s move towards a cashless society. It is also considered a highly competitive market, with operators constantly being forced to come up with new offers to win and retain more customers.

RMIT finance lecturers Dr Pham Nguyen Anh Huy, Dr Doan Bao Huy and Dr Nguyen Thanh Binh discuss the current situation within the industry, and where they are heading to next.

What’s the competition currently like in the e-wallet market?

Dr Pham Nguyen Anh Huy: We are witnessing a fierce competition among e-wallet providers. Although the market is rather crowded with over 30 providers (as of 15 October 2020), big names such as Momo, Moca and ZaloPay are dominating. Momo is one of the oldest players with a huge customer base (which recently topped 20 million) while Moca and ZaloPay are taking advantage of their ecosystems. The stiff competition leaves only a small space for newcomers, who may have to resort to competing via discounts and burn lots of money in the process.

Dr Doan Bao Huy: At the moment, each e-wallet is trying to offer some exclusive products and services. Momo is active in payment services for grocery and convenience stores. ZaloPay, which is built on top of Vietnam’s most popular messenger app Zalo, offers lucrative cashback deals for mobile top-ups. Meanwhile, Moca’s reach has grown upon the two basic services on Grab’s platform – ride-hailing and food delivery. However, many built-in functions are similar across different e-wallets. This means people can use multiple wallets for the same product or service as long as they get the best deal out of it, so e-wallets need to work very hard to gain the loyalty of customers. 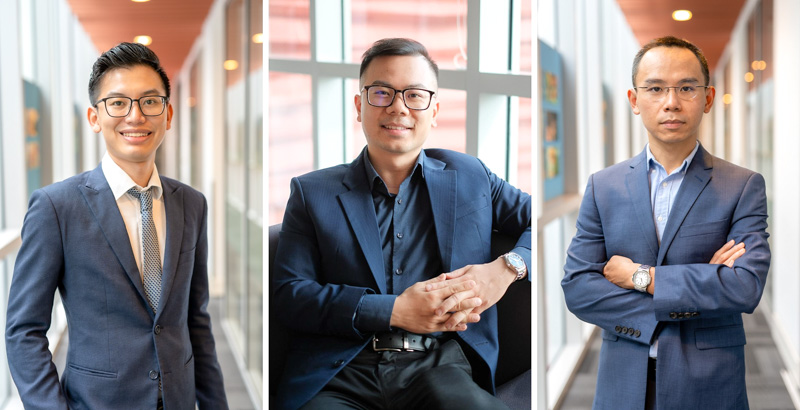 RMIT University finance lecturers Dr Pham Nguyen Anh Huy, Dr Nguyen Thanh Binh and Dr Doan Bao Huy (from left to right) said that competition in the e-wallet market is about the ‘survival of the fittest’.

What are the biggest long-term challenges for e-wallets to be profitable?

Dr Nguyen Thanh Binh: To come out on top of the war of financial attrition, e-wallets need to balance the growth of their user base and the implementation of a sustainable business model. They need to develop more value-adding ecosystems that can attract and make users willing to pay for the services they provide. Given the current strong competition of e-wallets offering cashless payments, it may be difficult for e-wallets to increase payment transaction fees while expanding their user base. Instead of focusing on charging fees to become profitable, e-wallets could morph into fintech companies and provide a wide range of financial services, such as lending, wealth management and insurance, similar to what Alipay and Ant Group have been doing in China.

Dr Pham Nguyen Anh Huy: One of the biggest problems with e-wallet providers is that they fail to show clear advantages over traditional banks in the long run. Most services offered by e-wallets such as fast money transfer or utilities and e-commerce payment are now included in mobile apps offered by traditional banks. Bank apps might have to catch up with e-wallets on a number of other services, but this can be easily solved via mergers and acquisitions. I think e-wallets need to go back to the original idea of replacing a traditional wallet: a wallet is not only used for payments and holding different bank cards, but also to store other things such as loyalty cards, membership cards and business cards.

What does the future hold for e-wallets in light of recent regulatory changes?

Dr Doan Bao Huy: The State Bank’s Circular 23/2019/TT-NHNN, which took effect from January this year, requires that the monthly e-wallet transaction value per customer and service provider not exceed VND100 million. This seems reasonable as the average daily transaction is around VND230,000 to 274,000, according to market research firm Cimigo. However, with the linkage between e-commerce platforms and e-wallets (such as between Tiki and Momo or Zalopay, Shopee and Airpay, and Lazada and eMonkey), the current regulation can hinder e-wallet users from paying for home appliances and electronics products priced at dozens of millions of VND, hence eliminating associated transaction fees earned by these e-wallet providers.

In addition, the Vietnamese government has recently given a green light to a mobile money pilot project. Mobile money generally performs the same function as e-wallets, but it does not need to link to a bank account like the latter. This new announcement allows the top three biggest mobile networks - VNPT, Viettel and Mobifone - to step into the e-payment industry and reach the unbanked population. Together with their advantages in capital, infrastructure and customer awareness, their presence will certainly increase the competition in the industry.

Dr Nguyen Thanh Binh: In June 2020, the State Bank of Vietnam released a draft decree on the regulatory sandbox for fintech activities. This is opening the door for fintech companies, such as e-wallets, to experiment more with innovative financial products that benefit the Vietnamese financial market.

E-wallets that are allowed to operate in the sandbox can experiment with innovative technologies and receive timely feedback from the regulators, thus reducing the risks of tapping into unregulated fields and ending up rejected by the regulators. Since the e-wallets in the sandbox will need to comply with certain regulatory requirements (such as transaction limits, number of customers, and location), they might slow down their market expansion compared to when they operate outside of the sandbox. However, the growth will be more stable and sustainable as the companies will gradually comply with the regulatory requirements.

Dr Nguyen Thanh Binh is a Lecturer and Acting Senior Program Manager, Finance, in the School of Business & Management at RMIT University. He has published in leading international journals on cryptocurrencies and real estate finance. Prior to joining RMIT, Dr Binh worked in Germany for more than five years at the University of Regensburg and at the German Central Bank.

Dr Pham Nguyen Anh Huy is a Finance Lecturer from RMIT University’s School of Business & Management. His research interests are in the fields of fintech, cryptocurrencies, environmental finance, asset pricing and empirical finance. He has published his work in a wide range of academic journals such as Accounting and Finance and Economic Modelling among many others.

Dr Doan Bao Huy is a Finance Lecturer from RMIT University’s School of Business & Management. Prior to joining RMIT, Dr Huy worked as a lecturer and researcher at the University of Technology Sydney, the University of New South Wales, and the Vietnamese-German University. His research interest are asset valuation, portfolio risk management, and financial forecasting.

Eighty-three out of 104 scholarships will be granted to prospective pre-university, undergraduate and postgraduate students to study at RMIT University in Vietnam and are now open for application.

RMIT Vietnam co-organised an Industry 4.0 Roundtable Luncheon with the Victorian Minister for Trade and Investment Tim Pallas from Australia on 11 January 2023.